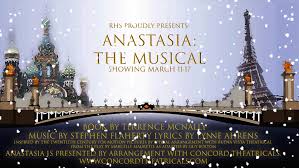 Based on the beloved animated movie from 20th Century Fox, Anastasia is both a heartwarming and heart-wrenching dive into one of history’s biggest unanswered questions: what happened to Grand Duchess Anastasia Romanov? Set amidst the turmoil of the Russian revolution with the Bolshevik regime on the rise, Anya, an amnesiac orphan stranded in what was once the Russian capital, St. Petersburg, is on a quest to rediscover her past which she believes lies in Paris. Joined by a dashing conman, Dmitry, and an ex-aristocrat, Vlad Popov, who wants to use Anya to bamboozle the only remaining Romanov, Dowager Empress Marie into believing that Anya is the lost Anastasia, she escapes to Paris with a determined Soviet officer on their heels. Including classic songs from the motion picture like “Journey to the Past” and “Once Upon a December”, Anastasia explores one determined girl’s journey to find home, love, and family as she discovers who she was and embraces who she is meant to be.

Tickets may be purchased in advance at https://www.showtix4u.com/event-details/48258